The award-winning cheese is made from sheep’s milk by Roger Longman and Pete Humphries at White Lake Cheese, Pylle, Somerset. It was named the top cheese from just under 900 cheeses that were entered into this year’s awards, held on the first day of the Royal Bath & West Show, Shepton Mallet, Somerset.

English Pecorino is made from thermised sheep’s milk with vegetarian rennet. It has a sweet smooth, long-lasting creamy flavour with subtle nutty notes. It is washed in brine three times a week and is matured for around six months.

Roger Longman, co-founder and cheesemaker at White Lake Cheese says: “I was ecstatic when our name was read out as Supreme Champion. It was great that some of the team were at the awards dinner and were able to step up to the podium to collect the prize. It’s thanks to the whole team that this happened and that we are able to produce our award-winning cheeses. 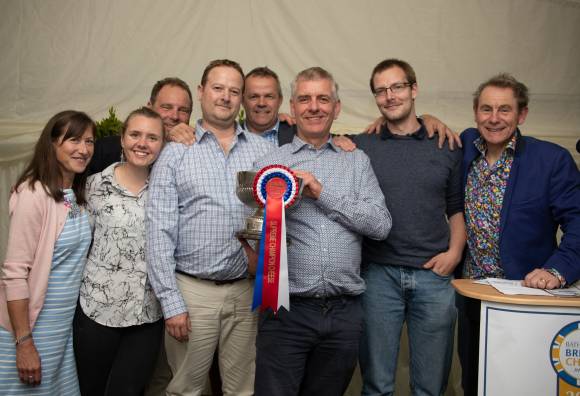 “The British Cheese Awards is a great competition for artisan cheesemakers. The level of judging is superb as the judges are extremely experienced, they are the best in the UK, and we really value the feedback that we get from them.

“The British Cheese Industry at the moment is a fantastic place to work in. As well as established cheesemakers there are also new and upcoming cheesemakers, like Marcus Fergusson who makes Renegade Monk, who are making really exciting cheeses. There’s a real comradery in the industry that you don’t see in many other businesses.”

Julius Longman, chairman of the British Cheese Awards, says: “This English Pecorino from White Lake Cheese is an exceptional cheese and a worthy Supreme Champion. It has a semi-hard texture with a well-balanced creamy and nutty flavour. It’s third year in a row for Pete and Roger and a testament to their skill in cheesemaking.

“The standard of entries in the awards this year was very high and we’re very fortunate in this country to have such a great number of dedicated and skilled cheesemakers that are renowned for their excellence and commitment to quality. This is reflected in the cheeses that were judged this year. All the cheeses that were entered into the competition are on display at the Royal Bath & West Show until this Saturday 1st  June.”

As well as Supreme Champion, the Reserve Champion, the four Country Awards and the nine Main Category Awards, there were two new awards for Best Block Cheddar and the other for Best Traditional Cheddar. This year there were also 13 Special Awards, including an award for Best Specialist Cheesemaker.

This year’s competition attracted just under 900 entries from 122 makers, with 70 judges reviewing 123 classes of cheese. Cheeses entered came from over 54 counties that covered the length and breadth of the UK and Ireland, showing just how vibrant the British Cheese Industry is today.

This year the awards celebrated its 26th birthday and a new location. The awards were held in Exmoor Hall, located opposite the Main Ring. It not only hosted the awards, but  it also has a dedicated area where cheesemakers are selling their delicious cheeses to cheese enthusiasts. So from traditional farmhouse Cheddar to more adventurous cheese, such as highly fragrant washed rind cheeses, there is a great selection of products to buy. The hall will be the ultimate destination for turophiles.