Alan Watson from Paxton & Whitfield Wins Cheesemonger of the Year 2019!

Alan Watson, a cheesemonger from the UK’s oldest cheese shop Paxton & Whitfield, was crowned Cheesemonger of the Year at the Royal Bath & West Show on Thursday 30th May 2019.

The competition, held on the second day of the Royal Bath & West Show, saw eight contestants from cheese retailers across the country compete for this coveted title. The finalists had been selected by the British Cheese Awards committee from written entries that cheesemongers from across the UK had submitted for consideration to then be invited to the final.

The written entry form consisted of a brief history about the entrants’ work in cheese and a response to the following question: ‘You have around  £30 to shop for a cheeseboard for 6 people – which British cheeses would you buy?’

Alan Watson, winner of Young Cheesemonger of the Year 2019, says: “Just taking part in the competition is a great accolade for any cheesemonger and to have been surrounded by such talented people yesterday was incredibly daunting. On top of that having such respected and  experienced  judges added to my slight feeling of nerves when I started the day. However, I managed to keep a calm mind and approached each round of the competition with determination. The feeling of hearing my name read out as the winner at the end of the day was amazing and it really hasn’t sunk in yet that I won!”

Alan beat seven other cheesemongers who came from cheese shops that included Neal’s Yard Dairy, La Fromagerie, La Cave a Fromage and others.

The eight finalists were put through four, nail-biting rounds: 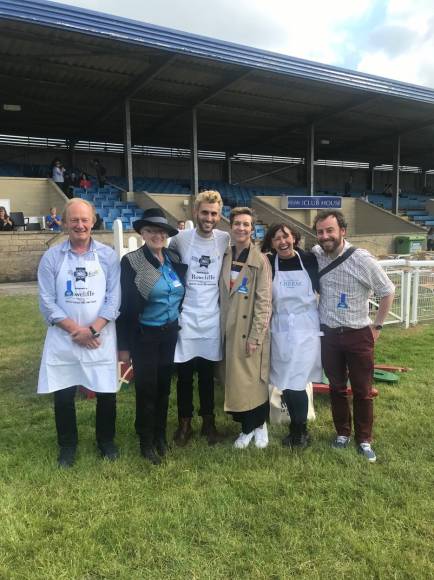 Julius Longman, chairman of the British Cheese Awards, says: “I was extremely impressed by the eight finalists and how they performed throughout the competition day. Although there did have to be a winner it’s good to know that the profession of being a cheesemonger is in safe hands with young cheesemongers like these coming up through the ranks.”

Mary Quicke MBE, award-winning cheesemaker, says: “It was a privilege and pleasure to have spent the day with such talented young people working in cheese.  They were all really passionate, knowledgeable and capable when it came to participating in the competition.  We had such a great range of challenging tasks to give them and a great variety of cheesey things to do.  There were so few points between all the competitors in the final marks. The winner, Alan, was well deserved. It’s great there are such motivated young people championing cheese across the country.”

Tracey Colley, director of the Academy of Cheese, says: “What a fantastic line up we had for Young Cheesemonger of the Year 2019, they were certainly put through their paces but rose to all the challenges with passion, skill, patience and humour! Our eight finalists ranging in age from 21 to 29 years old are a credit to the cheese industry and we feel very proud to be helping them on their journey onwards and upwards. The winner, Alan Watson from Paxton & Whitfield the UK’s oldest cheesemonger, shone through with his knowledge of British cheeses, cutting and wrapping skills and identification and assessment of the five competition cheeses.”

Michael Lane, editor of Fine Food Digest, says: “Alan Watson’s experience, understanding and enthusiasm proved to be a potent winning combination but he was run very close by an excellent field of finalists. All eight of the contestants impressed the judging panel with their level of knowledge, approach to selling cheese and, most of all, their individual personalities. Each one is a credit to themselves, the shops they work in and the professional title of ‘cheesemonger’.”

Becoming an expert cheesemonger is more than just learning about how to cut cheese. It’s about knowing all the cheese varieties, how to care for them and understanding how they are made. The competition was open to cheesemongers under the age of 30 and sponsored by Fine Food Digest, Britain’s leading trade magazine for speciality fine food and drink, and the Academy of Cheese, providing training and knowledge for the cheese industry.